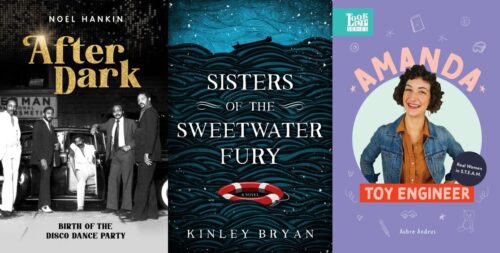 NEW YORK, N.Y.—June 16, 2022—A history of the Black-owned discos in 1970s New York, After Dark: Birth of the Disco Dance Party by Noel Hankin, won the top prize for the inaugural memoir/autobiography category at the U.S. Selfies awards ceremony this evening. The winner in the fiction category, Sisters of the Sweetwater Fury by Kinley Bryan, tells the tale of the Great Lakes Storm of 1913, with stories inspired by the author’s great-grandfather, who was at the helm of the four-masted schooner Golden Age, and his wife, Annabel, serving as ship’s cook, when the storm hit. Amanda, Toy Engineer by Aubre Andrus, won in the children’s category. A book for young readers about a mechanical engineer and marathon runner, Amanda teaches readers about science, technology and more.

Emcees at the virtual event were Jo Henry, managing director of BookBrunch, and Carl Pritzkat, president of BookLife, which administered the awards in conjunction with the award’s co-presenters, Publishers Weekly and BookBrunch.

“With the announcement of the winners of the third annual U.S. Selfies awards, the publishing industry has further testament to the advancements indie authors have made in bringing vital, captivating stories to life,” said Cevin Bryerman, CEO and publisher of Publishers Weekly.

Runners-up were The Puppet Maker’s Daughter by Karla M. Jay for adult fiction and Daughter of Light by Garrett Curbow for the children’s category. There was no runner-up in the memoir/autobiography category.

“The U.S. Selfies awards illustrate the wealth of talent in self-publishing today,” said Carl Pritzkat, president of BookLife and COO of Publishers Weekly. “Noel Hankin, Kinley Bryan and Aubre Andrus give us new worlds to explore—whether the dance party discos of New York, the early 20th century danger of the Great Lakes or a new frontier of mechanical engineering for girls.”

“It was harder than ever this year to choose winners from such strong shortlists, and I’m delighted that the winning titles in each of the three categories showcase such an impressive range of great books now available from indie authors,” said Jo Henry, managing director of BookBrunch, founders of the Selfies Book Awards.

U.S. Selfies jurors for memoir/autobiography were Jo Henry of BookBrunch; Mary Webber O’Malley, a writer and a bookseller for Skylark Bookshop in Columbia, Missouri, and scheduling producer and co-host of the Blaze Boudoir on A Mighty Blaze; and Sophia Stewart, deputy editor of the Millions, an associate editor at Publishers Weekly and a 2021-2022 Emerging Critics Fellow at the National Book Critics Circle.

“Anyone with any sort of interest in ’70s music or music history will find this a fascinating read,” the jury wrote about the winning memoir, After Dark: Birth of the Disco Dance Party.

Sisters of the Sweetwater Fury was praised by the adult fiction jury as “[an] impressive debut. Packs a lot, but with a solid economy of language and good pacing. Well researched too.” Jury members included Robin Cutler, president of LMBPN Worldwide Publishing, CEO of HowToPublishBooks.com and creator and developer of IngramSpark; Rachel Kerr from BookBaby Publishing who previously worked with local Philadelphia radio and TV stations as a producer; and Gabino Iglesias, a writer, professor and book reviewer for NPR, the Boston Globe and the San Francisco Chronicle who lives in Austin, Texas, and whose work has been nominated for the Bram Stoker Award, the Locus Award, the Anthony Award, the International Latino Book Award and has won the Wonderland Book Award for Best Novel.

In the children’s category, jurors said, “Amanda, Toy Engineer is an informative, fun, and friendly insider’s look at what goes into toy design…. It’s approachable, dynamic, and effectively blends infographics with photographs, captions, and prose.”

The winning authors each receive a $1,000 cash prize, promotional book displays valued at over $2,500 from Combined Book Exhibit (CBE) at major book fairs around the world, a feature in the

CBE librarians’ newsletter reaching 30,000 librarians and a $5,000 package of print and digital advertising in Publishers Weekly.

Noel Hankin (After Dark: Birth of the Disco Dance Party, ISBN 9781736614907) is a founder of The Best of Friends, Inc. (TBOF), a group that promoted discotheques in New York City starting in 1971. They owned Leviticus, Justine’s and Bogard’s in midtown Manhattan, Brandi’s in Brooklyn and Lucifer’s in Queens. These nightclubs paved the way for Studio 54, Saturday Night Fever and the nationwide explosion of disco in the late ’70s. Hankin is a retired senior executive who managed some of the world’s most successful brands at Moët Hennessy USA and Miller Brewing Company. He also wrote speeches for CEOs and has been published in Vital Speeches. He has a B.A. from Queens College, a Marketing Certificate from the Wharton School of Business and an Honorary Doctorate from Medgar Evers College/CUNY.

Kinley Bryan applied her love of writing to the world of corporate communications before her fascination with historical fiction became too great to ignore. Her debut novel, Sisters of the Sweetwater Fury, is set during the Great Lakes Storm of 1913. It was inspired by stories of her great-grandfather Walter Stalker, who was at the helm of the four-masted schooner Golden Age, his wife, Annabel, serving as ship’s cook, when the storm hit. Bryan graduated summa cum laude from Kent State University with a degree in English and earned a master’s degree in communication from John Carroll University. Her love for the inland seas swelled during the years she spent in an old cottage on Lake Erie. She now lives on the Atlantic Coast, where she prefers not to lose sight of the shore.

Aubre Andrus is the award-winning children’s book author of The Look Up Series, a nonfiction biography series featuring real women in S.T.E.A.M. careers. She also has written dozens of books for National Geographic Books, Lonely Planet, American Girl, Disney, Scholastic and young YouTube stars. She currently lives in Los Angeles with her family where she’s the founder and CEO of Adjective Animal Publishing, an indie kids press.

About the U.S. Selfies

The mission of the awards initiative, which was the creation of BookBrunch and introduced to great acclaim in the U.K. in 2018, is to discover new talent and reward the best self-published titles each year. The U.S. awards’ first year focused on adult fiction published during 2019; in 2020 the categories were expanded to included children’s books (picture books, middle grade and YA). In 2022 the U.S. awards added the memoir/autobiography category. Awards are granted to books self-published in the year prior by authors and illustrators currently living in the U.S.